His books were stored in boxes in my office. Suddenly he came in like a storm. And he was 80-ish at that time. He noticed the books were still unpacked and he gave me hell. I thought, what on earth is happening here? I was ignorant about him as a person, what he stood for, what he meant, what he thought of himself. I was confused because I didn’t know the importance of the man as a Temperance leader. 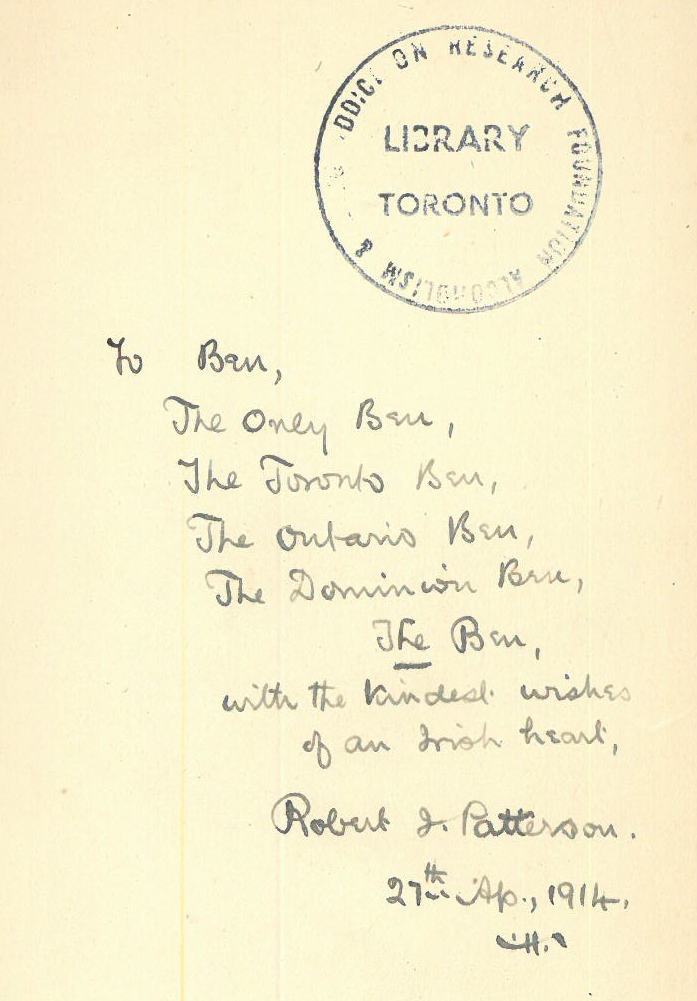 About the Spence Collection

The Spence Collection is a historical collection of books donated by Reverend Benjamin H. Spence which are united by the common themes of alcoholism, temperance and prohibition. Several books authored by Spence and his brother Francis Stephens Spence can also be found in the collection. Spence donated his collection to the Ontario Alcoholism Research Foundation Library in 1958. The original collection was made up of more than 300 volumes, including journals and pamphlets and a portion of this collection has since been integrated into the Special Collections at CAMH Library. Several of the books have unique dedications to Spence from the authors like the one pictured left.

Reverend Benjamin H. Spence (1867-?), colloquially known as “Mr. Prohibition of Canada,” was a prohibitionist who was actively involved in the temperance movement in Toronto. His father, Jacob Spence, was involved in the abstinence movement in Ireland before he came  to Upper Canada in 1861 where he continued his work. Jacob Spence was secretary of the Ontario Temperance and Prohibitory League and printed pamphlets at home, an activity which he involved his children in. In January 1907 Ben Spence took on the role of secretary of the Ontario branch of the Dominion Alliance when his brother stepped down from the position. He was general Secretary for the Dominion Alliance for the Suppression of the Liquor Traffic and Managing Director of the Canadian Prohibition Bureau. He authored several books on alcohol, prohibition and liquor control, focusing on the Canadian context.